You are here: Home › Colorado Lawmakers: “Offending us is bullying and is punishable by jail” 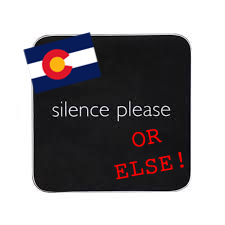 Last week, the Colorado House passed a “cyberbullying” bill which kills free speech and could land you in jail with fines if you annoy (translation: offend or insult) someone using your phone, email, social media or an other medium that’s electronic and interactive.  Democrat Representative Rhonda Fields (D-Aurora) sponsored it, but some Republicans also voted for it in an unrecorded voice vote, according to CBSDenver.

18-9-111. Harassment – Kianna Arallano’s Law. (1) A person commits harassment if, with intent to harass, annoy, or alarm another person, he or she:

Under the guise of stopping bullying towards children they’ve called it the “Kianna Arallano Law,” in honor of a Colorado high school cheerleader who survived trying to kill herself after being harassed via social media in 2013.  Because of Arallano’s attempted suicide, she is a paraplegic who can no longer speak.

But as usual with all leftist-sponsored bills, it’s really not about the children, and it’s not ultimately about harassment.  It’s also a disgusting exploitation of a very wounded teenager, for the benefit of those in power.  It’s about protecting the bill’s sponsors and other lawmakers from our exercise of free speech, and it’s about penalizing anyone who would dare criticize them.  They even admitted as much.  From the Denver Post (emphasis mine):

Republicans tried to amend the bill to make it more specific and apply the law only to minors. Democrats said adults are bullied on social media, as well, including public officials.

Take no solace that Republicans limply tried amending the bill to apply only to minors.  Had they gotten what they asked for, it would have still been a dangerous and unconstitutional breach of the First Amendment which would have eventually been applied more broadly once that door was opened.  It’s extremely concerning that any GOP voted for this bill in any form whatsoever.  This isn’t about minors, it’s about silencing you and me.  Regardless, the bill passed its first hurdle in its full form.

The bill has been introduced into the Colorado Senate on 2/25/2015.  If passed there, the Arallano Law will unofficially create the Colorado Department of Thought Police by making loosely defined “cyber-bullying” a misdemeanor harassment charge punishable by up to six months in jail and $750 in fines.

Anyone who’s offended by what you say via any form of electronics can file charges.  You could be guilty if you electronically speak out against your lawmakers or the President, or criticize athletes’ performances or balk at Hollywood stars, or perhaps even if tell your best friend she’s having a bad hair day.  The possibilities are limitless, and it’s an egregious all-out assault on the First Amendment.  If you appear to have the intent to harass, annoy, or alarm someone, you’re violating the law.

While the GOP holds a majority in the Senate and could kill this dangerous bill, it is unsafe to assume they will all vote to do so.  I urge my readers to do your part to stop this ridiculous muzzling bill with far-reaching consequences to everyone.  Contact your Colorado State Senators here today, and tell them to vote NO on the Kianna Arallano Law, HB15-1072.

3 Responses to Colorado Lawmakers: “Offending us is bullying and is punishable by jail”