You are here: Home › Big Media Charades the Senate Anti-Gun Bill as Pro-Gun 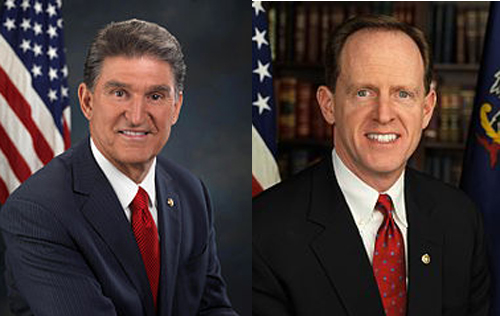 Leave it to ABC News to misdirect the conversation about gun (people) control once again. This time it’s all about the Orwellian-titled bill, The Public Safety and Second Amendment Rights Protection Act, that the Senate is jousting over. See how they do it:

Sens. Joe Manchin(D) and Pat Toomey(R) announced a bipartisan compromise today seeking to expand background checks for the sale of guns – both at gun shows and online – that could help break the impasse in the gun-control debate in Congress.

It’s a breakthrough! Hallelujah! And by two pro-gun Senators to boot! Wow!

Manchin sports an A rating from the NRA but he really doesn’t care:

Toomey also is rated an A by the NRA, and he doesn’t care either:

Now we could talk about this nonsense and conclude, as so many observers have, that criminals will still get guns regardless. And others will riff about the dangers of mental health as a back door to gun confiscation. Still others will note the heavy involvement of the NRA in crafting this “compromise.”And they’re right. But that’s not what’s missing here. What’s missing is this: there is no way this bill will even see the light of day in the House of Representatives. It will die abornin’. Here’s Manchin’s dreamy assessment:

Today is the start of a healthy debate that must end with the Senate and House, hopefully, passing these commonsense measures and the president signing it into law. (my emphasis)

It’s all a charade, carefully crafted to promote the establishment meme: even thoughtful pro-gun worthies with A ratings from the NRA are getting behind this. You should too.